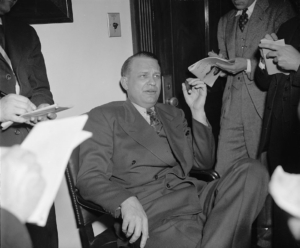 In the midst of the Great Depression the federal government initiated a series of programs to hire unemployed artists and writers. Today, these provide a lens through which American history, values and everyday life were viewed in the 1930s. The first such program, the Public Works of Art Project (PWAP), 1933-1934, hired more than 3,700 artists during its 5-month existence. They produced more than 15,000 artworks in practically every type of public building. PWAP was replaced by the Treasury Section of Painting and Sculpture (TSFA),1934-1943, which sponsored competitions and awarded commissions to selected artists who turned out more than a thousand post office murals. The WPA launched the Federal Art Project (FAP) in 1935, along with the Federal Writers’ Music and Theater Projects. All came under attack from conservatives in Congress and ultimately were defunded. The creative output that resulted from this unprecedented era of government sponsorship is now regarded as an American Renaissance.