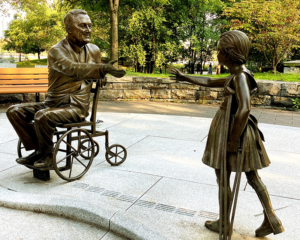 FDR was 39 years old when he was stricken with polio in 1921. Back then, people with disabilities were considered weak and unemployable. FDR’s opponents sought to exploit his inability to walk as a political vulnerability. He was rarely seen or photographed using a wheelchair. Yet, many believe that FDR’s disability shaped him as a person and as president. He made conquering polio a national cause. By his own indomitable spirit and his advancement of federal policies, FDR helped to dismantle the societal barriers that, more than disability itself, can limit one’s ability to achieve. READ MORE