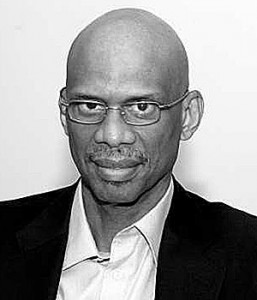 In 2009 the LA Times did a little feature on the National Endowment for the Arts, the fate of which was under debate as conservatives attacked its relevance in the latest iteration of the Obama stimulus package. The Times asked the hoi polloi of Hollywood what they would do if they took over the NEA. Basketball hero Kareem Abdul-Jabbar and actor Bill Pullman both talked about the way that New Deal art programs blended civic worth with aesthetics. Check out what they had to say:

Kareem Abdul-Jabbar, top all-time scorer in the NBA (also an actor and author): “I’ve been asked what I would do if I were in charge of the NEA. Given that times have taken on a very strong resemblance to the New Deal, I would try to emulate one of the very successful programs from that era. During the 1930s, American artists were hired by the WPA and other agencies to help beautify America in conjunction with many Public Works projects. Thousands of artists, sculptors, landscapers, filmmakers, musicians and writers were involved in using their crafts to help beautify America. The Federal Art Project, the Federal Music Project, the Federal Theatre Project, the Federal Writers’ Project, and the Historical Records Survey were the vehicles that made this possible. Many of their contributions are still with us and have become a special part of America’s cultural landscape. Someone who understands how all this came about would be the perfect person to help make it possible to again create jobs for America’s artists and craftsmen.”

Bill Pullman, actor (Independence Day, Sleepless in Seattle, and many others): “The $50 million for the NEA is tacked on, and — when fed into the existing pipeline — will disappear like water on fresh pavement. These projects have to be visible and bold in their impact on our national psyche in the next year. We don’t have time to address fears of becoming labeled (socialist, Maoist, etc.), but we need the stiff hit of a new aesthetic playing through some focused creativity to kick us into new models of who we are. Brand the use of this little pile of money and call it ‘Fresh Approach.’ Decree that the projects will go to individuals, not institutions. The individuals’ projects must be their response to: How can I be of service to the common good of our citizens? The aesthetic of the art of the New Deal was the answer to a question of who we are. It can still be seen in murals in post offices, travel books by unexpected authors, and our use of terms for theater like ‘living newspaper.’ The actual look of the aesthetic of ‘Fresh Approach’ can’t be predicted now, but it should give us a caffeine jolt for the huge national endeavor we are beginning that will restate who we are to the world.”
Rachel Brahinsky is the Living New Deal's managing director and postdoctoral fellow.
Email | View all posts by Rachel →