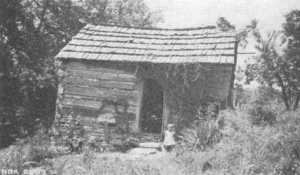 The cities were electrified; rural areas were not. A light went on when Nebraska Senator George Norris had an idea: Rural homes across the country should have greater access to electricity. Rural Americans weren’t being given a fair chance, Norris said. They were “growing old prematurely; dying before their time; conscious of the great gap between their lives and the lives of those whom the accident of birth or choice placed in towns and cities.”

Morris needed to have President Franklin D. Roosevelt understand that truth. By 1930, nearly 90 percent of urban homes had electricity; only ten percent of farms did. The high cost of bringing electricity to rural areas left rural residents to languish under the flickering lights of candles, gas lamps, oil lanterns. Electricity would revolutionize their lives. 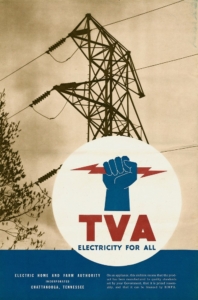 Roosevelt heard Morris’s call for change. As part of the New Deal, FDR signed the Rural Electrification Act (REA) on May 20, 1936, providing federal loans for the installation of electrical systems in rural areas. It was three years after Roosevelt had signed the TVA Act, establishing the Tennessee Valley Authority to address the Valley’s need for energy and economic development by creating a public corporation.

The REA established the Rural Electrification Administration, which provided thousands of much-needed jobs. Crews, including teams of electricians, travelled nationwide stringing thousands of miles of wire.

Many believed privately owned power companies were charging too much for power, did not employ fair operating practices, and were subject to abuse by the utility holding companies that owned them. By 1939, 288,000 households had electricity provided by hundreds of rural electric cooperatives. Most of these electric coops received loans from the REA. 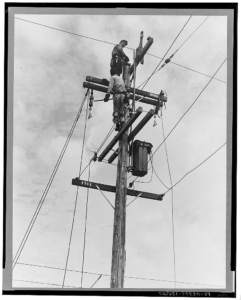 Just as Norris thought it would, impoverished regions of America became more productive and more prosperous. REA funding and the work of the newly formed cooperatives transformed rural life. In 1942, half of US farms had electricity. By 1950, 87 percent of farms had electrical service. By the mid-50s most all of them did.

The Rural Electrification Administration still exists today as the Rural Utilities Service, under the US Department of Agriculture. Nearly 900 rural electrical coops are still in operation, providing service coast to coast.

New challenges for rural Americans have arisen, however. Many today are living in digital darkness—10 times more likely to lack broadband internet access than their urban counterparts.

The Federal Communications Commission (FCC), a New Deal agency established in 1934, estimates that today a quarter of rural Americans and a third on tribal lands do not have access to broadband internet, defined as download speeds of at least 25 megabytes a second. Fewer than 2 percent of urban dwellers have this same problem. A 2018 analysis by the National Rural Electric Cooperative Association noted that 13.4 million people lack adequate high-speed internet service. 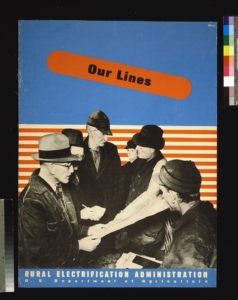 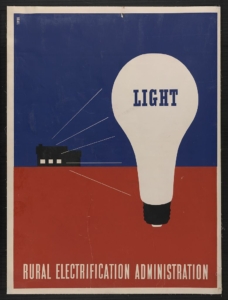 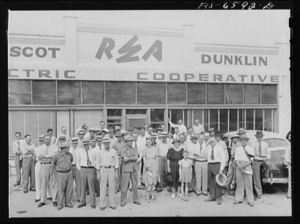 As it was in the early 1930s, the issue is cost. Stringing fiber optic cable costs about $20,000 per mile. There are many miles to cover in rural America and not a lot of customers populating those miles. The estimated cost hovers at $40 billion. Federal action is required. President-elect Biden has pledged to spend $20 billion on digital infrastructure.

Senator George Norris would be pleased if the federal government did more on this front. Rural Americans deserve a fair chance. Lacking broadband isn’t just an inconvenience—not being able to watch Netflix or shop Amazon. Studies have proven lack of access to broadband internet is a major hindrance to employment, health, civic engagement and education—particularly in light of COVID and the need for online learning. A better life should only be a mouse click away. 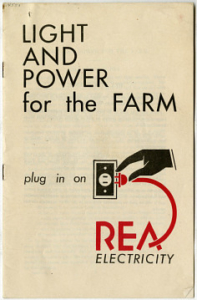 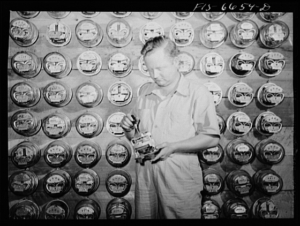 One comment on “A Light Went On: New Deal Rural Electrification Act”