University of Missouri, Kansas City, Economics professor John Henry (a honorable name in its own right) writes that the federal government can – and should – create jobs, just as it did under the New Deal.  See Prof. Henry’s remarks on the amusingly-named blog, Naked Capitalism.  There’s a terrific slide show there, too, by Mitch Green, on what the New Deal achieved. 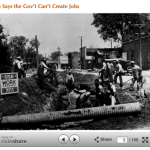