Leslie Correll writes from Oakland about her father: 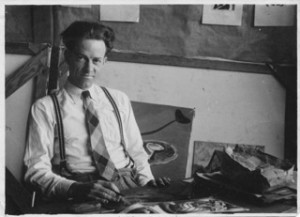 Richard V. (Dick) Correll was on the Federal Art Project (FAP) in Seattle, specializing in printmaking, but he also produced drawings, gouache paintings, and two murals for a high school in Arlington, Washington. He is especially noted for his suite of prints created for the Works Progress Administration (WPA) on the American folk hero, Paul Bunyan. (One of the murals in Arlington features Bunyan creating the Columbia River.)
Correll, a natural artist from early childhood, was largely self-taught. However, the WPA offered a rich opportunity for all artists to share techniques and ideas with one another, and during this period, Correll’s technique matured and crystalized. Following the WPA years, he earned a living as a commercial artist in the book publishing and advertising fields in Seattle, New York City, and San Francisco, while producing a large body of fine art in his own time. He was long associated with the Graphic Arts Workshop of San Francisco. Correll has been described as “one of the leading masters of printmaking in the West.” Although never formally a teacher, Correll’s masterful command of technique and powerful, rhythmic composition blended with compassionate, humanistic subject matter influenced and inspired many of the younger generation of West Coast printmakers and graphic artists.
A permanent archive of Correll’s work has been established at the University of Washington-Libraries Special Collections in Seattle. Correll’s artwork, including many prints from the WPA era, is in many museums, public institutions, and private collections. For further information, please see www.richardvcorrell.com.

Leslie Correll is an artist in three dimensional/mixed media, and is the editor of the book, Richard V. Correll: Prints and Drawings.