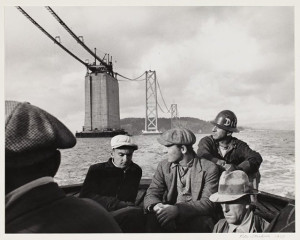 What is the best way to honor the workers who made the original San Francisco-Oakland Bay Bridge?  SourceFine Arts Museums of San Francisco, 2016

The Franklin D. Roosevelt Four Freedoms Park, on New York City’s Roosevelt Island, is sited across the East River from the United Nations. Why not a memorial to New Deal workers and artists on Treasure Island in San Francisco where the U.N. was founded?

The San Francisco Arts Commission has announced plans to dedicate areas on Treasure Island to temporary installations of public art using steel reclaimed from the old San Francisco-Oakland Bay Bridge.  A permanent installation honoring the city where the U.N. originated would serve to commemorate not only those who built the bridge, but all workers whose efforts restored America’s economy and spirit during the Great Depression. Those who found work with the various New Deal “alphabet soup” agencies enacted to provide jobs for millions of unemployed included San Francisco artists whose works enriched the public sphere. New Deal artists included many women and people who reflect our region’s multicultural diversity.

Treasure Island is in direct sight line of Coit Tower (home to 27 New Deal-era murals depicting life in California) and is the site of the Art in Action program at the second year of the 1939 World’s Fair, where Diego Rivera and WPA artists worked and interacted with the public.

Bay Bridge steel could be used with other media, like the enameled mural on steel depicting the 1934 general strike across from the Rincon Annex Post Office or like the photographs and text on onyx of the Abraham Lincoln Brigade Memorial across from the Ferry Building. Artists might interpret the multiple legacies of the memorial with images and quotes from the workers, artists or writers of the period.

This is a unique opportunity for San Francisco. The materials are available, and there are many artists capable of taking up this challenge. There are arts and civic-minded funders who could get behind this concept. It only needs broad public exposure to spark the creative synergy to make it a reality.

One possible funding source for this project is through the Fort Mason Center for Arts & Culture, which is seeking proposals for art installations, public sculptures, projects and performances between January and December, 2016.

One comment on “A Call to Artists… Building Bridges: A New Concept for Bay Bridge Steel”